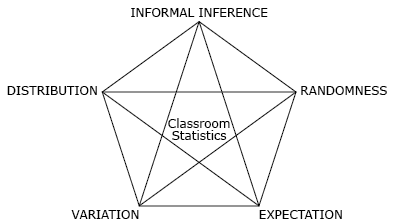 Variation is the term that describes the differences we observe around us in every aspect of life, such as age, height, rainfall, temperature and prices. Variation is first mentioned in year 3 where students are asked to recognise variation in chance outcomes.

Expectation arises when we wish to harness variation and summarise data. For example,

It arises throughout the curriculum but is referred to explicitly in year 6.

Randomness describes a phenomenon in which the outcome of a single repetition is uncertain, but there is nonetheless a regular distribution of relative frequencies in a large number of repetitions. It is explicitly mentioned in year 8.

Informal inference is an evidence-based process balancing the variation and expectation found in sample data when answering a meaningful population-based question. It is implicit throughout the curriculum.

It is the variation in data that attracts our attention and prompts our questions. Without variation there would be no statistics!

Expectation narrows the focus of data from its overall variation to a summary statistic, such as the arithmetic mean or most common value (mode), or to a theoretical value such as the probability of an event.

Distribution provides the mechanism for studying variation and expectation by promoting visual representations of data.

Randomness arises in processes that have unpredictable individual outcomes but that display patterns over the long term. The unpredictability creates variation and the pattern produces expectation.