The language of shapes

Every early mathematics classroom should have a plentiful supply of pattern blocks. 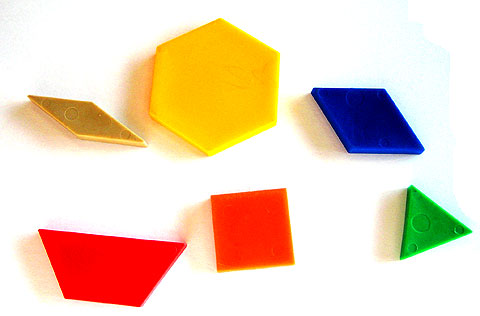 A set of pattern blocks.

Pattern blocks may be used to introduce students to some basic geometrical concepts that arise from the patterns within the shapes. For example, you could give each student a set of six different blocks and ask them to discuss the following questions.

Initially, it is best to use everyday language, such as:

Geometrical language can then be gradually introduced, such as:

Notice that the term 'regular polygon' has a special meaning in geometry; it is a polygon with all sides and angles equal. In that sense, only the triangle, square and hexagon are regular polygons. Nevertheless, the other figures do have some regularity.

Year 3: Identify symmetry in the environment