Geometry has many technical terms, some of which sound alike. For example, confusion often arises over the meaning of these three: bisect, intersect and intercept.

Clear explanations of the meaning of each term, with illustrations as necessary, are needed. The terms become meaningful once the concept has been understood.

In this figure, CD bisects AB at E and AB intersects CD at E. 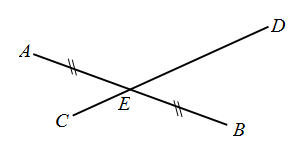 In this figure, EF is the intercept formed when AB intersects both CD and GH. 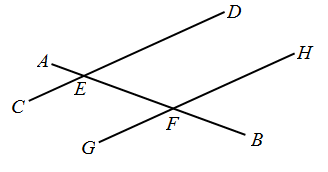 It can be helpful to explain the origins of terms (e.g. the prefix 'bi' comes from the Latin meaning 'two') and relate to other familiar words (e.g. a bicycle has two wheels).

When we use the term 'similar' in geometry, we refer to specific aspects of size and shape. All measurements are accurate and all proportions exact.

For example: I have a similar rectangle.

In contrast, things which we describe as 'similar' in everyday conversation may have a sense of 'likeness' about them which is unrelated to measurement and shape.

For example: I had a similar experience.

To promote geometric literacy, teach the words and symbols of geometry explicitly, use the correct terminology when teaching and provide opportunities for students to explain their ideas using the correct language.