Ratios are most commonly used to express the quantitative relationship between two groups, and can be modelled using discrete items.

For example, the ratio of 2 to 3 can be represented as a group of two squares compared to a group of three triangles: 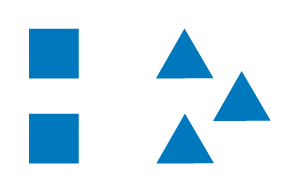 Another way of describing a ratio is that it indicates the number of times one amount contains the other amount, or is contained within the other amount. We could say that:

Rate is also an expression of a ratio, but is usually used in more dynamic contexts. Rate is often used to describe a constant relationship in the increase or decrease of measures, such as time or length.

Working with ratio is part of understanding equivalent fractions and is the essence of proportional reasoning.